I really enjoyed your performance. It shows kids not to bully in a fun and interesting way. I loved how you walked around and let volunteers come up to the stage. I think that not one kid was disappointed with your performance. I love how you don’t care about how other people think about you. You remind me of my brother he dresses how he likes and does not care what people think about him. Both of you are individuals in a very special way.

Yesterday was my brother Tim’s celebration of his life. They will lay him to rest in Tucson Arizona. I love you, Tim.

TONIGHT’S FULL MOON Grandmother Moon rises to her fullness, She reminds us to ground into who we are & to remember how important our presence is in the continuum of our lives as we savor the moments that flow. Our ancestors from beyond the veil root for us to remember, to wake up to our lives & the gifts that we each have. You have a chance to bring through the veils a part of your soul that can help you on this next stage of your journey. This Full Moon is forcing you to look at where you ignored your creative voice & abandoned yourself, in the face of opposition. Let her help you honor those places in you that mourn for what never was or what can no longer be, and then move on to the wisdom that comes from letting go of those feelings so you can get on with Life. Be open to new and different relationships but even more important, wake up to your own power and self-worth. Life is short but truly sacred. 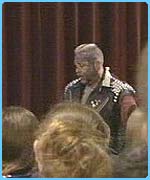 I just thought I would let you know what an amazing job you are doing. I came across a youtube video when I was looking up something about bullying.

I have been bullying as long as I can remember and have been at some low parts of my life because of it, and a man tells you what….if I would have come across your video before I would have been a hell of a lot happier.

But I did overcome bullying and I want to dedicate my life to help others overcome this as well. As of right I am Miss Northeast Kansas and will be in the Miss Kansas Pageant in June.

Thanks to you I have come up with my new Platform. Helping Kid overcome bullying. I just wanted to let you know you are doing a great job and keep it up.

“He does NOT use fear to end bullying he uses facts (found in newspapers for everyone to fear) and then he uses ROLEPLAY!!!!! He mirrors the behaviour back to the bullies hidden in the crowd before him, showing how ridiculous a way of spending your energy it is, he then parodies it and then spends MOST of the time explaining how victims can choose NOT to own the words and energy thrown at them, and the bullies have to really REALLY think about their behaviour and how it does nothing for them nor their victims â€“

And THEN he provides a curriculum with strategies that help to break down the ingrained ‘playground culture’ in institutions that perpetuates the bullying throughout and into the workplace, strategies that give the whole school (workplace) a chance to behave differently, just long enough to see that if everyone involved just sticks to the new way of being NO-ONE gets hurt.

Children respond to the true raw reality of what is going on, they are much more awake than are given credit for and they can understand The Scary Guy much more than many adults with their own limiting mindsets!

You have been given a grown-up’s uneducated version of something that does no harm and yet you are demonstrating PERFECTLY exactly the behaviour The Scary Guy changes – the mouthing off and prejudice about someone you haven’t gotten the full picture of yourself – passing on just the prejudice and misinformation of another.

The Scary Guy could help you not to be caught in the flow of someone else’s words and judgment. Be kind to yourself and treat others as you would be treated, would you want someone to put this much energy into publishing judgments about you when they haven’t met you nor seen your work in person? Live in Peace and be happy.